A bunch is happening in Alan’s world. Aside from a schedule full of conventions, new books are on their way. No, really. I’m serious this time.

The month of May will see the release of The Bloodsucker on Shady Lane and other tales from Voodoo Rumors. This is a short story collection set in the world of Voodoo Rumors, a paranormal-noir place where werewolves, vampires, demons, and whatnot run amuck on the streets of Nashville.

The stories include the novella, The Bloodsucker on Shady Lane. A frightful tale as Thomas Dietrich is hired to investigate a sting of vampiric killings in a quiet Nashville neighborhood.

The other stories included are My Drinks with Azazel, Catching Snow, Love Spells, and Red Lily and the Oriental Flower.

In June, another short story collection will debut. A Blind Eye from the Goddess and other steampunk tales will be available. This is a collection of my steampunk stories, some retooled and others new. 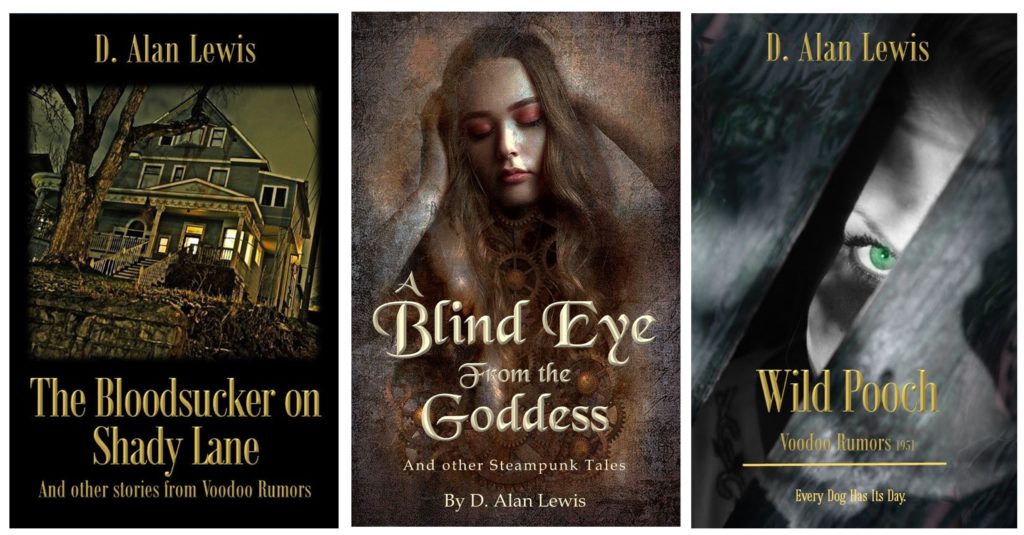 In July, the long awaited Wild Pooch, the fourth novel in the Voodoo Rumors series will be out. This time, Thomas Dietrich and his lady Natalie will be called to investigate a werewolf killing spree, but things are not always what they appear.

I’m looking for reviewers for both print and audio books. if you’re interested, please email for details. There could be free books in it for you.

I’m slowly getting caught up on my To-Do list. Here’s where we’re at so far….

2. My upcoming steampunk short story collection is in the editing stage. Here is a first look at the cover! 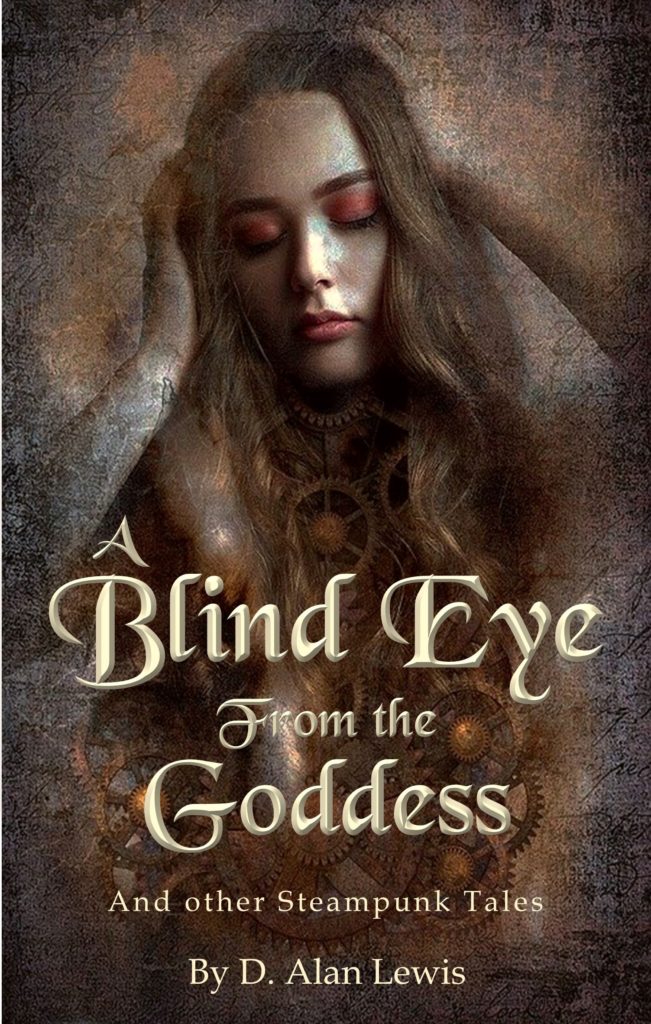 3. A print version of The Celeste Affair is almost ready for release. 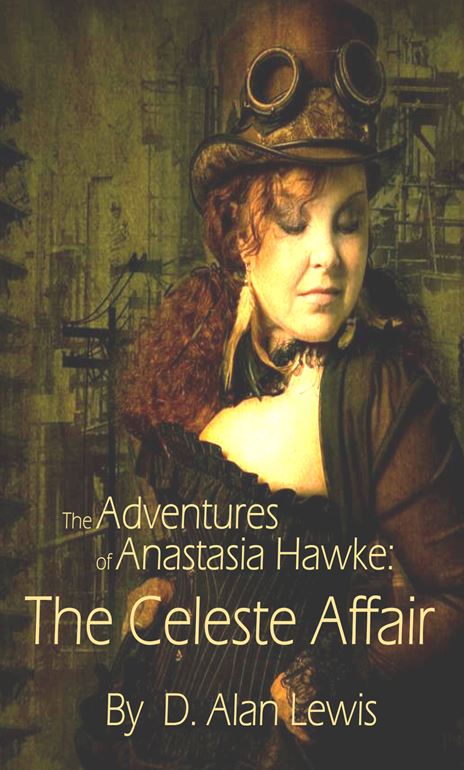 4.  My short story collection, set in the Voodoo Rumor’s universe, is in editing. Below is a first look at the cover of The Bloodsucker on Shady Lane and other stories. 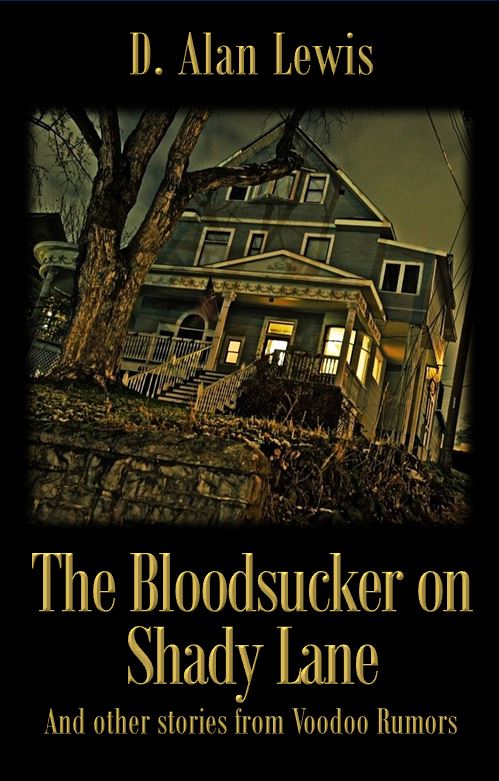 It’s been a while coming but I finally have something new to put up. My novella, Mata Hari: One Life For Another is now available in paperback and eBook. 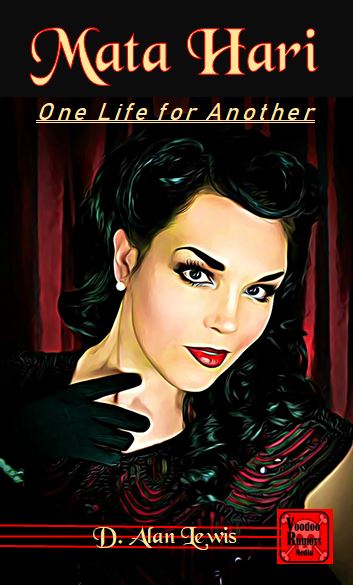 The story revolves around one of the greatest spies of all time.

As Europe tore itself apart during the first World War, one woman danced and ignored the horror. At least until the truth was exposed. Mata Hari, famed dancer and courtesan, found herself facing a death sentence for spying, but the British Secret Service make her an officer she can’t refuse. She can avoid a hangman’s noose on the condition that she kills a German general. The problem for Mata is that the man in question is the man she loves.

With the rights for many old short stories back in my hands, I’m rewriting and editing several of them with plans of adding new stories and releasing a number of genre-specific collections.

My novella, Mata Hari: One Life For Another, has been rewritten with a few new scenes added and will be released, hopefully in December 2020.

Book 4 of the Voodoo Rumors series, Wild Pooch, is in editing. Hopefully, I’ll have it out in early 2021.

7.18.2020:  Wow. Life has been chaotic.  Unfortunately, not a lot has been accomplished this year on the writing front. But trying to get that turned around.

I’ll update this soon with new of some new releases.

2.5.2020: I”m a little embarrassed by the time that’s elapsed since I last updated this website. A lot has been going on in both my personal and professional life.  Book four of the Voodoo Rumors series is way behind schedule, but I’m working on it.

A TV adaptation of The Blood in Snowflake Garden is still in the works. There maybe new coming soon about that.

2.8.2017:  So its been a while since I updated things here. My latest short story is about a time traveling journalist, who visits the Moon to watch and record the Apollo 11 landing.  Now available on Kindle. 2.04.14:  Pirates ahoy!!!  A Tall Ship, a Star and Plunder has arrived and Alan’s short story, The Celeste Affair is included. The story features the mother of the Hawke Girls, Anastasia Hawke and Captain Bishop, who appears in The Lightning Bolts of Zeus. 1.06.14: Capes & Clockwork is finally out and available in print. The ebook versions will be out, next week. 12.31.13: Happy New Year’s folks!!!   So a couple of announcements. Capes & Clockwork has gone to the printers and will be available next week on B&N and Amazon in print and ebook forms.

Also, Pro Se Press is releasing one of Alan’s short stories as a ‘One Shot’. To Catch a Copperhead is a pulp story set in a Civil War-era New York during the Copperhead’s attempt to burn the city. The story will be included in Pro Se Press’s High Adventure History, which will be released sometime in January, 2014. But it is available as a stand-alone story in ebook format.

12.26.13: The Bishop of Port Victoria is out and available in print and ebook versions! 11.29.13: Capes & Clockwork’s release date has been pushed back until Late December or early January. The first werewolf anthology that Alan is editing, Luna’s Children: Full Moon Mayhem is well under way and should be out in early 2014.

11.28.13: The Lightning Bolts of Zeus is NOW available on Kindle and Nook. The print versions should be available in the next few days. Also, the cover of ‘The Bishop of Port Victoria’ has been revealed. What do you think? 9.27.13: Beyond the Skyline, a science fiction anthology is now available. The book is produced by the Nashville Writers Group and was edited by Crystal Bryant. Alan’s story, Coming up on Temporal History Events is included in this volume. You can find the link to purchase on the ‘Buy Here’ link.

9.11.13:  Comfort Foods, a Southern Horror anthology is now available. The book is produced by the Nashville Writers Group and was edited by Nikki Nelson-Hicks.  Alan’s story, Dull Flesh, Sharp Fangs is included in this volume. You can find the link to purchase on the ‘Buy Here’ link.

4.19.12: Soundtrack NOT included, an anthology put together by the members of the Nashville Writers Group is now available. Alan’s zombie story, ‘A Blindeye From the Goddess’ is one of the featured stories. Check the Buy/Purchase page for information on how to get your copy.

12.02.11: The Blood in Snowflake Garden is now available in print and all ebook formats. Check the Buy/Purchase link to see what retailers are carrying it.

Also, checkout the nice write-up on my publisher’s website. http://www.facebook.com/l.php?u=http%3A%2F%2Fbewritebooks.blogspot.com%2F2011%2F12%2Fhave-yourself-scary-little-christmas.html&h=wAQFyiII4AQG8mGfMwAj-7Ux3DeFg_S2GHs3j9uLwjKtleQ

11.25.11  The Blood in Snowflake Garden has been released in ebook versions on Amazon and Barnes&Noble. The print version is due out on December 2.

9.26.11  Alan will be working the NWMG’s booth at the Southern Festival of Books (in Nashville, TN  10/14/11 – 10/16/11) on Saturday and Sunday afternoons. There will be a drawing held at the booth for an autographed copy of The Blood in Snowflake Garden. Stop by, say hello and enter to win.

9.12.11  Check out the Library Police. Their latest podcast includes interviews from the Killer Nashville convention. I was lucky enough be be included for a fifteen minute chat with the guys.

7.18.11 One of Alan’s short stories will be included in the Nashville Writer’s Meetup Groups’s Anthology. In addition, Alan will be desiging the cover for the book. It it set for release later in the Fall of 2011.

6.17.11 D. Alan Lewis will be at the Killer Nashville Mystery Writer’s Conference in August. He’ll be a guest speaker on one or more writing panels. A full schedule will be posted once it has been finalized.

6.17.11 BeWrite Books has pushed the release date for The Blood in Snowflake Garden back to point closer to Christmas. Since the novel has strong Christmasy themes, this makes since. So … Remember the book will make the perfect gift!

The Blood in Snowflake Garden has been picked up by BeWrite  Books. The editing process has begun with a tentative release date in the summer of 2011.  BeWrite Books was launched at the turn of the millennium and has been releasing at least twelve titles a year. Their main office is located in British Colombia, Canada, but also have offices in the United States and Europe.

Each year, the Killer Nashville Mystery Writer’s Convention holds a contest for current and aspiring writers. The Claymore Award is bestowed upon the author of the best beginning (up to 50 pages) of an unpublished manuscript not currently under contract.

The ten finalists are chosen through a blind judging process and sent to the publishing partner, Five Star Press/Tekno Books. Five Star chooses the final winner, who receives an engraved replica of a Claymore dagger.

I’m proud to announce that The Blood in Snowflake Garden was chosen as a Top Ten Finalist for the award for 2010.

One thought on “News and Updates”