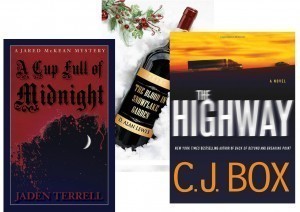 Why Killer Nashville gave me the boost when I needed it most.
In case you don’t follow me on Facebook, A good friend (Logan Masterson) is running a contest for a free membership to this year’s Killer Nashville mystery writer’s conference in Nashville. Some of the other prizes include signed books by Jaden Terrell, C.J. Box and myself.
Killer Nashville is a three-day mystery writers and readers  conference, filled with workshops, panels, writer guest, and so much more. It is a fantastic place for networking with publishers, agents, and fellow writers.
After moving to Nashville, I decided to jump into this crazy thing called writing. KN ended up being a great starting point for me as a writer. The first couple of years I went, I was able to attend many of the workshops and panels which helped give me the pointers needed to refine my writing as well as my search for a publisher. In 2010, I entered my manuscript for ‘The Blood in Snowflake Garden’ into the Claymore Award contest, sponsored by KN. As luck or skill would have it, I ended up as a Top Ten finalist. Lessons learned from their marketing and social media panels was invaluable as a beginning writer.
When my manuscript was first completed, I started querying publishers and agents. This was prior to the contest. I had no responses, but afterwards when I was able to say, ‘It’s a Top Ten Finalist’ the number of publishers interested skyrocketed. I do credit the Claymore along with KN for getting that first publishing deal.
So … Why is Killer Nashville good for you? Of all the books and stories I’ve written, only one is a mystery. Yet, the lessons learned at KN lend themselves to any genre. The workshops can help teach you about reading publishing contracts, marketing, writing tips, and so much more.