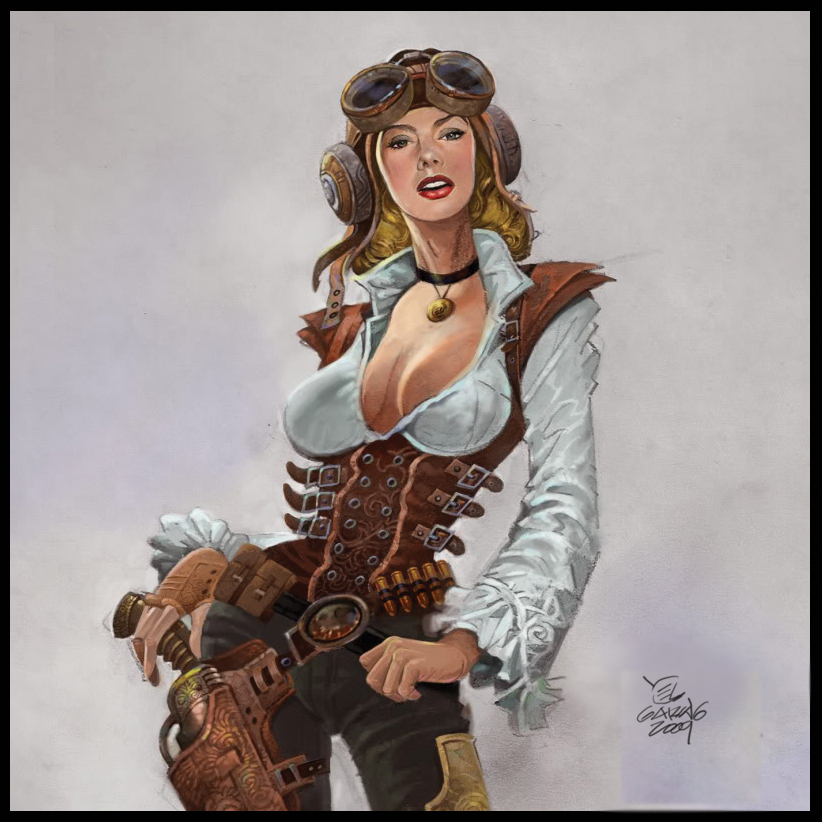 Steampunk Pirates Rule!!!
One of my short stories, ‘The Celeste Affair’ has been accepted to be in Dark Oak’s upcoming pirate anthology, ‘A Tall Ship, A Star, and Plunder’. Robert Krog is the editor and gave his permission for me to post the opening scene.
This steampunk/pirate story revolves around Annastia Hawke, mother to Jasmine and Thyme Hawke from ‘The Lightning Bolts of Zeus’ and the upcoming ‘Young Hawke Girls’ children’s series.
Look for it, later this year. The Celeste Affair
By  D. Alan Lewis
North Atlantic, 1863
The waves of gray fog, spiced with the acidic smoke belched from the ship’s engines, left a bitter taste in her mouth. She tightened her grip on the railing as the fishing vessel rolled back and forth through the North Atlantic. The morning fog had not been anticipated nor had the thick cloud-cover that hovered a thousand feet above that. Anastasia only hoped that the bitterness of the mist wasn’t a foreshadowing of things to come.
Her mission would be hard enough, but considering the news she bore and the conversation that lay ahead, the next few days would make the taste in her mouth seem trifle. Her stomach churned and her head pounded. Sea sickness wasn’t usually a problem for her when traveling by ship, but she’d been ill every morning for the past two weeks. Her breakfast threatened to return at any moment. Swallowing hard, the woman refused to let it happen. She refused to let the brutes see any weakness.
“Keep ringing the bell!” She shouted back to the one-eyed hulk who manned the ship’s wheel. As captain of this rotting schooner, he’d made his dislike of women and children clear. But the promise of cash and the poor hauls the ship had made lately convinced him to make this special trip, a rendezvous, fifty miles off the Irish coast.
He huffed but did as she said. The high-pitched clang made her wince but with little wind, the noise should travel far. All eyes looked to the sky and hoped.
A tug on her dress brought her gaze down to a mop of red hair resting atop a bundle of jackets and scarves. She stooped down and tugged at a thick green scarf until the eyes of her five year old daughter appeared, staring back at her.
“Jasmine Abigail, didn’t I tell you to stay below?” She scolded her daughter. “It’s too cold out here for you.”
“Is he here yet?” Jasmine asked but when Anastasia shook her head, the girl looked up with pleading eyes. “But… But I want to see him.”
The blast of an air horn made everyone onboard jump. Anastasia looked up and tilted her head as the underside of the airship materialized through the fog. The brilliant colors of the Union Jack seemed to glow against the bland gray and blue of the ship’s paint scheme. Her heart skipped a beat and she thought of him, up there, always watching over her.
This, the first true airship designed solely as a warship, bore the name Britannic. While flying vessels had been around for ten years or so, most were sea-going vessels stripped of their masts and sails and secured by ropes to large gasbags. The flagship of the Royal Air Navy stood apart from every other vessel aloft. Anastasia had been on board twice and still marveled at how the Brits had woven the most advanced technologies with centuries of sea-going traditions. She loved this ship, but not as much as the man who captained her.
“Of course,” she looked down at her daughter and a laugh escaped her, “I stand out here for hours, watching and waiting but as soon as you ask, he arrives.”
“I see something comin’ down,” someone shouted.
The hulk turned his duties at the wheel over to someone else and approached her. He pointed to a pair of men and bellowed, “Grab that thing as soon as it’s low enough and hold it steady.”
It only took minutes for the gondola to touchdown on the ship’s deck. Their bags were gingerly tossed into it after which, Anastasia guided the little girl in as well. Jasmine pulled the scarf down, her eyes wide and full of excitement. Anastasia couldn’t help but smile at her precious baby. Her daughter knew the dangers of being pulled off a ship in this manner and she didn’t care. Like her mother, Jasmine thrived on adventure.
While his men studied the airship, the captain’s attention never left her. Anastasia pulled a bag from her pocket and tossed it to the hulking figure. He snatched it out of the air, shook it and gave her an odd look.
“It’s more than I asked for,” he snarled.
She stepped into the metal box, closed the door and rang a small bell attached to the roof. With a jerk, the cable stretching from the top of the gondola to the airship tightened and lifted it from the deck.
“Half is our agreed price. The other half is for your silence. The airship, my daughter and myself… We were never here.”
The rest of the story is coming soon in
‘A Tall Ship, A Star, and Plunder’ from Dark Oak.