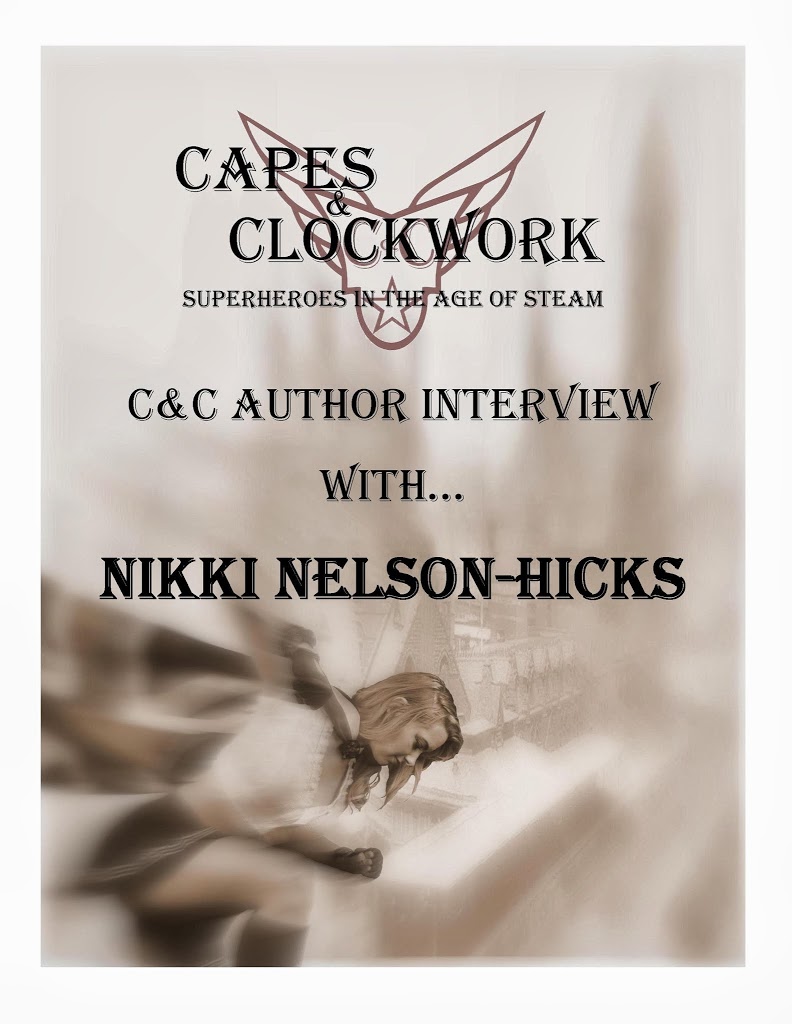 Capes & Clockwork is an upcoming anthology from Dark Oak Press which fuses the beauty and elegance of steampunk with the action and adventure of the superhero genre. As part of the ‘gearing up’ to the release of ‘Capes & Clockwork: Superheroes in the Age of Steam’, I’ll be interviewing some of the great authors that contributed.
And now on the stage, right here for your reading pleasure is…. Nikki Nelson-Hicks. Nikki is a resident of Nashville, Tennessee and is often heard muttering, “That’ll show ‘em! Eat my last Chips Ahoy, the cookie stealing summamitches!” while wearing only flannel bottoms and a black rhinestone studded bra. She is a blogger, a government worker/drone and her story, Ectoplasmic Eradicators Wanted, is featured in Capes & Clockwork

I put these two questions together because I can. So, yes. I like to start off with a seed of someone I know. It helps me to build a character by using the skeleton of someone I know then I slap on whatever meat I need to make the character do and be what the story requires. Does that make sense? Or is that way creepy?
As for how much of myself is in my characters, John Irving said that every novelist starts off writing about himself but if he wants to succeed, he’d best quit and learn to write about other people because NO ONE is that interesting. I agree with that sentiment although I also believe that, as egoists (and ALL writers are egoists), we can’t help not putting a little bit of ourselves into our characters, not if they are organic. A little bit of both. I only NEED two things at the beginning: where I am going (how the story ends) so I can figure out the best way to get there (how to start the story). It is always the middle part that is a fatty quagmire. To keep myself on track, I always keep a journal of my stories. I prefer Moleskine journals, unlined, so I can draw and doodle characters and sketch out plots.
Sometimes I will write a chapter from several different angles until I find the right POV. It’s a trick I learned from an artist friend who would sketch an object from 3-4 different angles before deciding on which idea was perfect.
For this story, Ectoplasmic Eradicators Wanted, I was told the setup (a mashup of Steampunk and Superheroes) and a word count. That was it. The rest of it was up to me to figure out. I usually write horror so a Ghost Busters theme seemed natural for me. I did a little research on Victorian child labor, theatre and Spiritualism.
First, I created my villain, decided what he wanted, and how he would get it.
Then I created my heroes and figured out what they wanted and how they would foil the villain’s plans.
And then I just ran with it.
I often compare writing a story to shooting up heroin. If I can find the perfect vein, it’s a rush. The story just flows through my bloodstream. But, sometimes, there is a lot of jabbing with a very dull needle before finding that right vein. It can be hellishly depressing. Luckily, I didn’t have that trouble with this story. I fell in love with Timothy Flood, Giselle Benedict and WEB and had a blast telling their story.

With Ectoplasmic Eradicators Wanted, I wanted something with a Steampunkish feel so I listened to the soundtrack to Sherlock Holmes: A Game of Shadows. Also I’m a huge Holmesian so…it killed two birds with one stone.
While I was writing A Chick, A Dick, and a Witch Walked Into A Barn…, a short story I wrote for Pro Se Productions. It had a very 1930’s pulpy feel, so I listened to red hot swing music.
Do I think it is a necessity? No. Neil Gaiman said he needs complete silence in the beginning of a story or he gets distracted. Stephen King said about how music created a barrier between himself and the outside world so he could create. Everyone’s process is different.

Easy question. Harry Dean Frogge. He is a protagonist in my Travis Dare series of stories about a ghost hunting team and their adventures. Harry has flaws: he likes to live rough and has a tendency to dabble in drugs and unsavory things BUT he is the bravest, most badass friend you could ever want to have on your side. Can you be jealous of someone you created? I am. I wish I was as fearless as Harry. This is a guy who has been through some serious traumatic shit, came out the other side, stood up and said, “Is that all, motherfucker?” He has no fear in helping other people or doing what is right.

What genre do you prefer to write/read?

I write horror so I am predisposed to things that are weird and fantastic.
However, let me define what I mean by horror.
I don’t like gore or splatter punk. I don’t like stories where people are massacred or tortured. Yes, a woman is hung by her thumbs while her vagina is welded shut (yes, a writer submitted a story to me for an anthology I was editing with that little gem. I rejected it) is horrific and nightmarish but there has to be a freaking REASON for it. And that reason better be damn solid. If it is done for the effect of grossing me out, that is sloppy and boring writing.
The difference between reality and literature is that there are definite rules in Storybook World. Things happen for a reason. Metaphor is a solid, not a liquid, squishy thing. And it is never more important than in Horror. Without a reason, it’s just gore and that’s lazy writing.  I despise lazy writing.

Is Writer’s Block a problem for you? If so, how do you deal with it?

My family is often on my back to keep writing. They are always asking what project I am thinking about, what am I writing, what new idea am I brewing because they know, better than anyone else in the world, that I am a very poor human being when I am not writing. I become depressed and that leads down a very dark, slippery slope down a very deep hole.
When Momma ain’t happy, ain’t nobody happy.
For me, the worst times are right after I have finished a project. There are the few days of blissful, YAY! LOOKY WHAT I DID! but they fade to that gray sludge of what to do next. My mind is flat and my creative well is dry.
So, what do I do?
I refill the well. I go on walks in strange, new places. I read new books. I read fiction and nonfiction. I go wandering. I draw, paint, sculpt with clay. Some other artform that isn’t writing. I watch movies, television, go to plays. Hell, find some play that is doing open auditions. Nothing gets those creative juices flowing like anxiety and competition.
I keep my mind open and look for new ideas. I try desperately not to pay any heed to the Black Dog of Depression that is howling just over the hill. It is always there and it does no good to sit down and wait for it to rip out your throat. Keep moving, keeping pumping and fill the well.
And then I put my butt back into the seat and write. Currently I have Ectoplasmic Eradicators Wanted, a short story in the Capes and Clockwork anthology. I also have stories in the anthologies Nashville Noir (The Unanswered Call) and Soundtrack Not Included (Black Cherry). I also have three short stories with Pro Se Productions that are due to come out in 2014. I edited a horror anthology called, Comfort Foods: This Ain’t Your Momma’s Cooking which is available on Amazon. I also edited a book for Pro Se Productions, Six Guns and Spaceships, an anthology of space Westerns.
And in my spare time, I am working on stories of my own. The Travis Dare Adventures and the Bogie Bar stories are high on my list of Very Important Stories to Finish.
As well as getting back to my blog, www.nikcubed.blogspot.com. Sometimes it is forgotten in all the craziness.

I read. I read lots of things. Fiction, nonfiction. Encyclopedias. Magazines. Newspapers. Obituaries. Oh, man…obituaries are a gold mine for life stories and names.
I talk to people. Strangers, friends, friends of friends. Everyone has a story to tell and, if you talk to a writer, you can damn well be sure it will end up in a story.
I ask questions. Lots of questions. Who? Why? What the fuck? Those are the main three.
I watch people. I’m that creepy creep sitting in the corner table at the pub, drinking alone and scribbling in a notebook. I try to suss up people standing around me. Why are they wearing that? Where did they come from? Where are they going? Who are they meeting? Who are they avoiding? I put on my imaginary deerstalker and go Sherlock Holmes on their asses. It’s fun for me. Probably not so much for them, I guess.
But here’s a tip that most people won’t tell you: try and kill a story before writing it. You have to decide which are worth spending time on. Which ones are worth the days, weeks, months they will eat up if you decide to write them to life. Is it worth it? Ask yourself that question before opening up that vein and pouring your life’s blood into it.

What are the 3 things every aspiring writer should know? When Neil Gaiman broke my heart and made fun of my t-shirt.
You can read the whole story at my blog, www.nikcubed.blogspot.comunder the heading The Neil Gaiman Story.
﻿