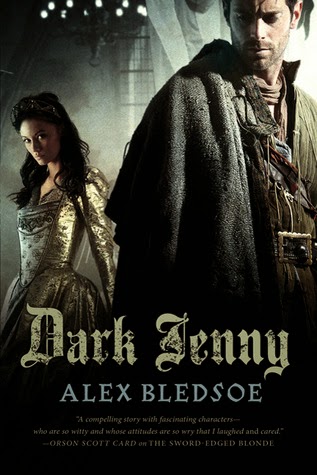 A review of Dark Jenny
By Alex Bledsoe High Fantasy Noir maybe an accurate way of describing Alex Bledsoe’s third installment in the Eddie LaCrosse saga, Dark Jenny.
Eddie LaCrosse is a self described ‘Sword Jockey’. A former mercenary turned P.I (albeit middle-ages style), Eddie is hired to check up on a nobleman suspected of adultery. A turn of events however has our wise-cracking hero at the pointy end of a sword, manacles on his wrists and a lot of people calling for his execution.
At a reception for Queen Jennifer Drake, a murder is committed with Eddie and the Queen herself as the prime suspects. With his life at stake, Eddie jumps into the investigation determined to clear his own name and bring the killer to justice. But immediately, he finds this is not a clear cut act of murder but a more involved political gambit to discredit the Queen and the throne.
Bledsoe weaves a wonderful tale of political intrigue, action and the right amount of humor. Drawing loosely on the legend of King Arthur and the Knights of the Roundtable, the story unfolds with some familiarity and plenty of surprising changes, twists and characters that keep you guessing until the very end. The dialog is witty, the action scenes are fast and well placed, and the characters leave you wanting for more. This book, even though the third in the LaCrosse series easily stands alone.
Dark Jenny is the perfect crossover for both lovers of the classic hardboiled detective novels of Micky Spillane as well as those who love the high adventure styling found within the Arthurian legends.
I give it 4 ½ stars.
http://alexbledsoe.com/