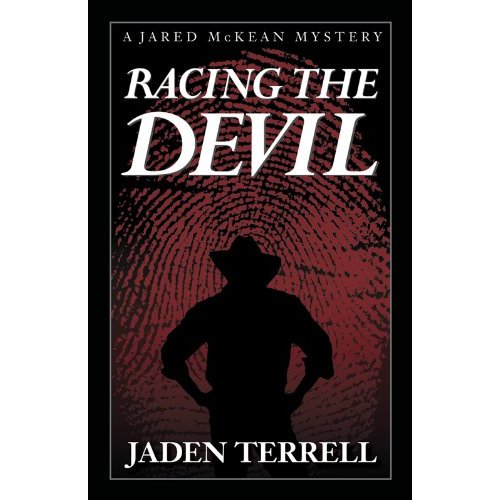 A review of Racing the Devil By Jaden Terrell
Racing the Devil is the first of the Jared McKean mystery series written by Nashville native, Jaden Terrell. It is a top-notch PI novel that drops a former cop turned private investigator in to a nightmare that few would have the ability to escape from.
Jared McKean awakens to find himself framed for the murder of a young Christian housewife. The Police have his DNA, prints and eyewitness testimony to prove he was thekiller. Thing is, McKean isn’t the type of man to go down without a fight.
Through a well-paced and wonderfully written story, we follow along as the DA’s casebuilds against him. Even old friends and family question his guilty while he picks at the few threads to unravel the elaborate framing job that has ended one life so far. Humor and action as well as well-placed steamy moments move the story along to an unexpected ending. All the clues and suspects are in place and only a mind as sharp as McKean can put the parts together for the reader to easily understand in one of those forehead slapping moments when the reader says, ‘Of course it was…’
The characters, especially McKean were well rounded and believable. The plot has enough twists to keep the reader’s attention and the description of Nashville made you feel as if you were riding through the city. But almost as important to the read as the murder and frame-job, was McKean’s family life with really brought a since of humanity to the nightmare he was embroiled within.
Ms. Terrell’s first outing with Jared McKean is certainly a must read.