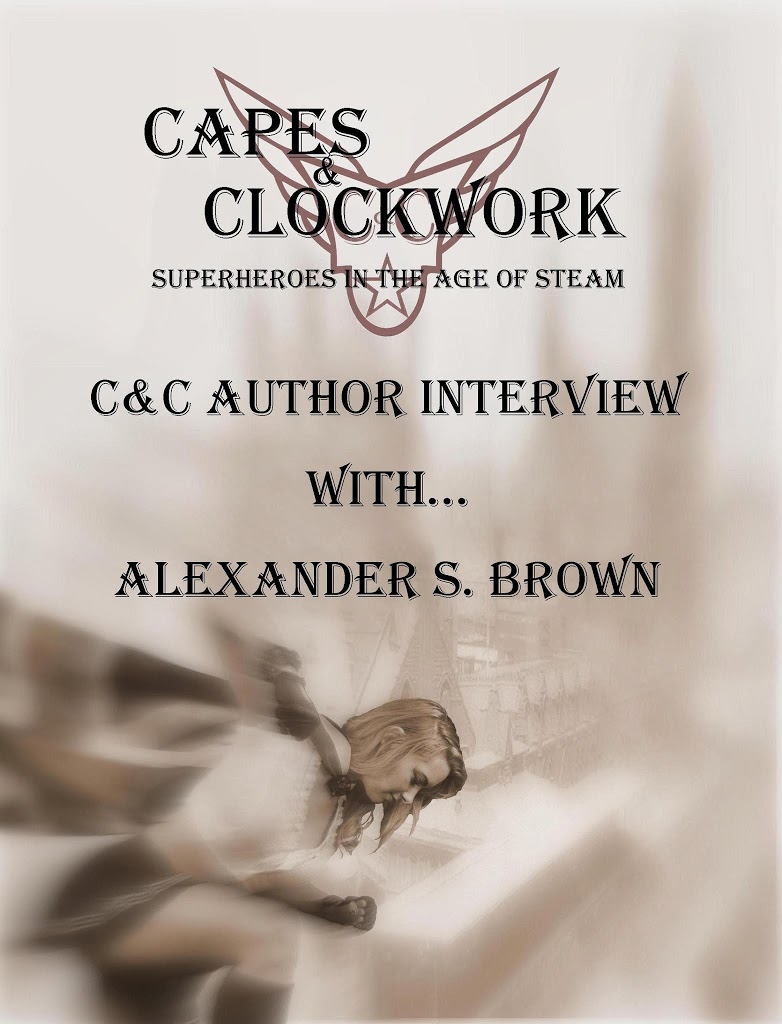 Capes & Clockwork is an upcoming anthology from Dark Oak Press which fuses the beauty and elegance of steampunk with the action and adventure of the superhero genre. As part of the ‘gearing up’ to the release of ‘Capes & Clockwork: Superheroes in the Age of Steam’, I’ll be interviewing some of the great authors that contributed.
And now on the stage, right here for your reading pleasure is…. Alexander S. Brown 
Alexander S. Brown is a Mississippi author who was published in 2008. His first book, Traumatized, is a short story collection that has received rave reviews from horror fans throughout America. Although, Brown began as a horror author, he has recently published three young adult steampunk tales, which can be found in the anthologies, Dreams of Steam vol 2 and 3, and Clockwork Spells and Magical Bells.  His poem, “Maters” was later published in the magazine, Midnight Screaming Volume 3, #4. His most recent endeavor is the paranormal anthology, Southern Haunts, which he edited and composed with author, J.L. Mulvihill. The special edition of Traumatized and his horror novel, Syrenthia Falls will be released in the fall of 2013.
Do you base your characters on people you know or know of?
I tend to think that all characters I create have been influenced by someone in my life.  Sometimes it’s obvious who the character represents; other times, it’s more vague.  I suppose it depends on how much the individual has impacted my life.
Do you plot out your stories or just make it up as you go? I plot out novels and novellas. Very rarely do I ever plot out a short story.
Which of your characters would you most like to meet in person?
Well, since I mostly write horror, I would have to say that one of my steampunk characters would be more suitable to meet.  In all honesty, I would like to meet my superhero Hester from Capes and Clockworks.  The reason is because I never knew she existed in me.  Of course, I always had a love for Ironman and the movie Freaks, but I never knew the two would come together as they did.
What is your latest project/release?
My newest monster soon to hit the market is my novel, Syrenthia Falls.  This is being published by Dark Oak Press.  I warn readers in advance.  This book isn’t nearly as delicate as its title.
Favorite authors?
My favorite authors would have to be H.P. Lovecraft, Edgar Allan Poe, Clive Barker, Stephen King, Dean Koontz, Chuck Palhanuick, Anne Rice, Jillian Flynn, Alice Seabolt, V.C. Andrews, David Moody, John Ajvide Lindqvist, and Scott Sigler.  This is only a partial listing.
How much of you is in your characters?
Quite a bit of me is in my characters.  I’ll let you decide exactly how much after you meet me and then read my works.
Do you prefer writing short stories or novels?  And why? I enjoy both equally.  It is actually a difficult pick between the two.  Short stories and novels are two completely different monsters.  Sometimes a thought is deserving of a short story; other times it is deserving of a novel. What are you working on now?  I am currently editing the sequel to Southern Haunts: Spirits that Walk Among Us.  The sequel, Southern Haunts: Devils in the Darkness, is an anthology composed by editor Louise Myers and myself.  I recently finished a vintage Halloween collection called The Night the Jack O’ Lantern Went Out which I believe Pro Se Publishing is going to grab.  I have my manuscript, Looking Glass Creatures, in the hands of Seventh Star Press and I’m outlining the sequel to my novel, Syrenthia Falls, for Dark Oak Press.
Is Writer’s Block ever a problem for you?
If so, how do you deal with it?  Writer’s Block used to be a problem for me.  It isn’t anymore.  You have to train yourself to write and see where your writing takes you.  As the author, Angela Sparrow, once said to me, “You can write a sentence.”
What are 3 things you feel every aspiring writer should know?
1. Believe in your work.
2. When you write, make sure you have a nice pacing, relatable characters, and believable dialogue.
3. Advertise, advertise, advertise.  Never turn down a review, interview, or public speaking opportunity. Thanks Alex for your time.
Look for Alex’s story, Indestructiblecoming soon in Capes& Clockwork.