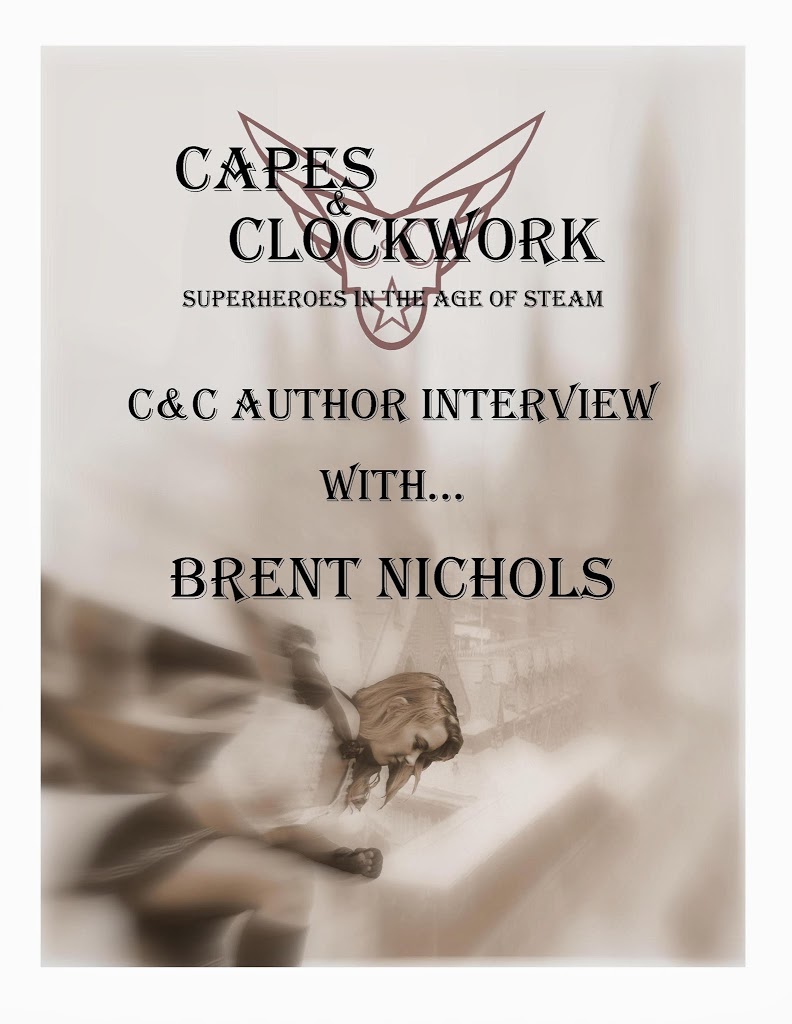 Capes & Clockwork is an upcoming anthology from Dark Oak Press which fuses the beauty and elegance of steampunk with the action and adventure of the superhero genre. As part of the ‘gearing up’ to the release of ‘Capes & Clockwork: Superheroes in the Age of Steam’, I’ll be interviewing some of the great authors that contributed.
And now on the stage, right here for your reading pleasure is…. Brent Nichols.
Brent Nichols is a Canadian writer of steampunk, science fiction, and fantasy. His stories can be found in the anthology Shanghai Steam from Edge Publishing and in eSteampunk Magazine. His novel Lord of Fire will be released by Double Dragon Publishing in 2014. ﻿
Do you base your characters on people you know or know of?
Officially, no. There might be the occasional pain in my real-life neck who shows up as a villain, or perhaps the village idiot, in a story. I’m not naming any names, though.
I write a lot of strong, spunky, fearless female characters. My model to some degree for those women is my sister, Jodie. She’s always inspired me. She’s tough and courageous, and she’s smart and funny, and I look at the fun that I have being around her, and I try to make that come through on the page. I want my readers to say, “Wow, I really like her, and I want to spend more time with her.”
Do you plot out your stories or just make it up as you go?
I’m mostly a plotter. I like to know where a story is going before I set out. My outlines are often quite minimal, but I always have one. Often the middle of the story is a bit of a mystery to me until I get there, but I generally have two things in mind: a fun place to start the story, and a high-impact ending that I’ll build toward.
Which of your characters would you most like to meet in person?
I wrote a zombie play called ZOMG, which my sister performed in the Vancouver Fringe in 2013. The protagonist, Brenda, is one of the most fun characters I’ve ever written. She’s a tough, cynical, smart-mouthed butt-kicker, and she would be an absolute blast to hang out with. So long as I didn’t make her angry.
How much do you write each day/week?
My word counts fluctuate wildly. In January of 2011 I started keeping a log of my daily word counts, and it was a real eye-opener. I think 8000 words was my all-time high for one day of writing, and there have only been half a dozen days where I broke 5000. My daily average over a year is less than 2000, but it’s hard to pick out patterns. I firmly believe in writing every day, though I often fail to actually DO that.
One thing I’ve noticed is that there is no quality difference at all in the words I create on a 5k day compared to the words I produce on a 1k day. There is a perception out there that, if you write quickly, you’re a hack. It’s not necessarily true.
Can you tell about your experiences working with publishers?
It’s only in the last year and a half that I’ve started placing some short stories in anthologies. It’s been fascinating seeing how different publishers and editors work. One anthology had a high level of professionalism, with cogent, insightful suggestions from the editor and a PDF proof of the story for me to check over before it went to press. That company produced a beautifully-crafted book that I’m proud to be part of.
Another publisher accepted my story and paid me, gave no feedback at all, and apparently threw the book together with as little effort as possible. The book is perfectly legible, but it’s ugly and it looks amateurish. It hardly belongs on the same shelf as the other anthology.
I also placed a novel with Double Dragon Publishing this year. They are a well-established Canadian publisher, primarily of ebooks in the fantasy and science fiction genres. They assigned a freelance copy editor to my book, and she sends me emails pointing out little inconsistencies and asking about potential errors.
So far I’m not making much money from the publishers I’m working with, but some of the editing has been absolutely priceless. I’ve gotten better manuscripts, and above all I’ve gained real insight from working with good editors. What is your latest project/release?
I’m writing a series of steampunk/Lovecraft novellas called the Gears of a Mad God series. I’ve released the first five books, and I’m tinkering with book six. I have a rough draft, but it needs a lot of work. They’re darkly funny books full of action and adventure, with a plucky heroine who cobbles together steam-powered gadgets to get herself out of scrapes.
How much of you is in your characters?
That’s a good question. My first novel, an unpublishable wreck that taught me a huge amount, was all about me. The protagonist was pretty much me, with a bit of wish fulfillment mixed in, written in the first person without the benefit of much insight. I was 18 when I wrote it, and I didn’t know myself terribly well, and the resulting novel isn’t too impressive.
It’s much harder to see me in my characters now. I’m in my forties now, I’m more complex, and I have a greater understanding of myself and of other people. That makes it easier to write a greater variety of characters. I can take one facet of my personality, flesh it out, bring in elements from other people I’ve known, and turn that into a character. I might create a character who has one of my minor personal character traits as a major part of his or her character. There’s a bit of me in there, but it’s certainly not me.
I’m also more likely these days to be fascinated by traits that other people have that I don’t share. I’ll create a character who has very little in common with me, as a way of exploring bigotries or convictions or strengths that I don’t have.
What are you working on now?
I’m working on a series of sword and sorcery novels set in a Tolkein-esque world. I’m also putting the final touches on the sixth novella in my “Gears of a Mad God” series of steampunk/Lovecraft books. I was getting psyched out by the “Gears of a Mad God” series, taking it too seriously, and getting nothing done. I started the sword and sorcery stuff to give myself a break and make writing fun again. I’ve been quite pleased with the result. “Bone Magic” and its as-yet-untitled sequel are fun, rollicking stories with that high adventure component that makes writing, for me, a pleasure.
Is Writer’s Block ever a problem for you? If so, how do you deal with it.
Sometimes I get into a bad headspace where my thoughts just chase themselves in circles and I get nothing done. I usually try to put the manuscript on hold and come back to it later. Sometimes a fresh perspective after a break is all I need. Sometimes I end up abandoning a manuscript for good.
There are times when I can work my way through whatever’s blocking me. Anxiety is usually a significant factor, so sometimes I can simply remind myself that it’s just some letters on a page, nothing to get uptight about.
Sometimes I need to take a step back and either look at the bigger picture and re-think the structure of the story, or go smaller and write myself an outline for the chapter. Five or ten lines in point form are often enough to help me see the chapter or scene in manageable bites.
When I need to take a break from a manuscript, I usually switch to something new. This often results in a sudden spike in word counts, but it can lead to a proliferation of half-finished manuscripts. I don’t want to think about how many stories I’ve got on my hard drive, waiting for me to finish them.
What 3 things do you feel every aspiring writer should know?
There is a lot of good writing advice out there, and you should do a Google search and read a bunch of it. One thing you’ll find is that writers will contradict one another. You need to ignore a significant portion of the writing advice you receive. The key is figuring out which parts to ignore.
Similarly, you should find beta readers or a critique group and get feedback on your writing, but once again you need to ignore a significant portion of what you hear. Critiquers will contradict one another. Critiquers will just plain be wrong. You need to listen to only half of what they say. The trick, of course, is figuring out which half.
There is value to be gained from editing and re-writing, but only so much. It could be that the best use of your writing time is to set aside the manuscript you’ve been agonizing over, call it complete, and write something new. Don’t be one of those poor saps who has one novel, or even just one chapter, or half a chapter, after a decade of writing. Editing and tinkering have a certain amount of value, but so does moving on and writing a new manuscript.
Thanks Brent for your time.
Look for Brent’s story, ‘The Gears of Justice’ in Capes & Clockwork.