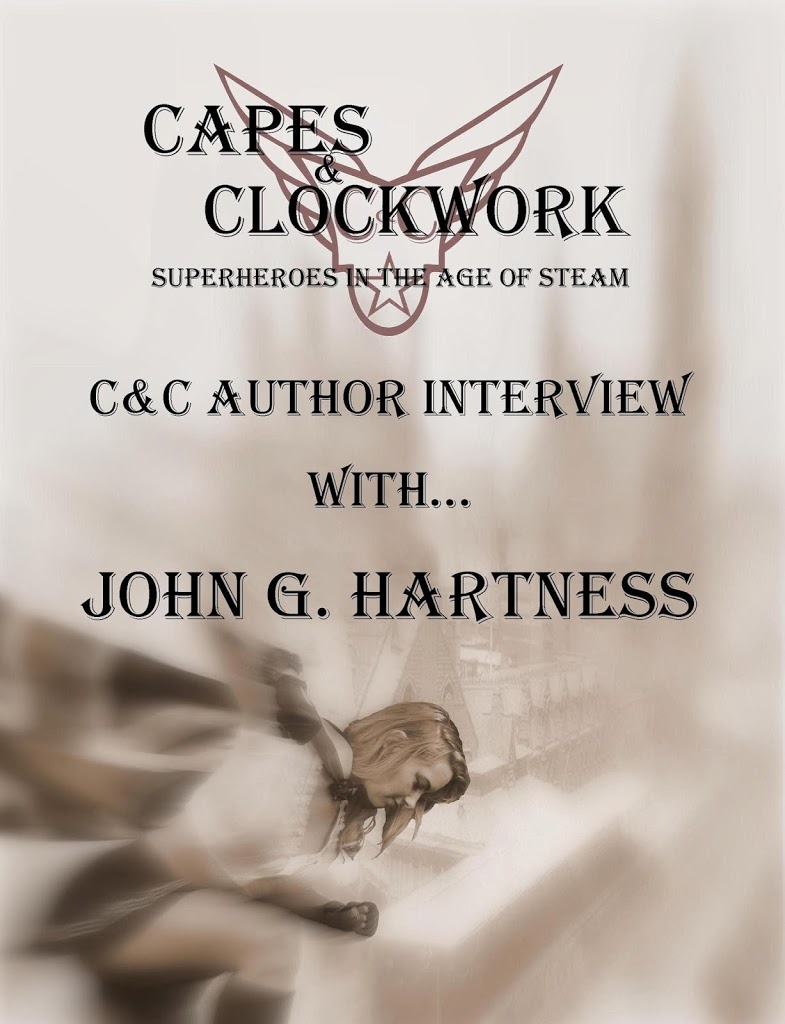 And now on the stage, right here for your reading pleasure is….  the one and only
John G. Hartness
At what age did you start writing?
I learned in first grade, but my penmanship was terrible. I started writing professionally in about 2006.
Where do your ideas come from?
I have a big jar under my bed. Whenever I run dry, I shake the jar until a couple of good ones fall out. Sometimes they bring chocolate! Do you base your characters on people you know or know of?
Yeah, they usually end up a mix of people I know. There’s no one person that is Jimmy or Greg, but there might be three or four people that all have parts of them.
Do you plot out your stories or just make it up as you go?
I outline pretty religiously.
Do you listen to music while you write and if so, what do you listen too?
I listen to all kinds of things, but I find that mellow Americana is best for most stuff. The Decembrists, The Avett Brothers, The Civil Wars, other bands with “the” in the band name. Rob Zombie is best for fight scenes.
Which of your characters would you most like to meet in person? All the strippers.
Which of your stories/books/works do you consider the best?
I think “Fair Play,” the story I put into The Big Bad, might be the best thing I’ve written.
How much do you write each day/week?
Depends on what else is going on.
Can you tell about your experiences working with publishers?
No, they buy me drinks and I want to keep them happy. I love my publishers. All of them. Long time.
Do you have a routine when you write?
First I poop, then I write. I find it difficult to do both at the same time.
What is your latest project/release?
Capes & Clockworks! And Writers for Relief 3! And Paint it Black!
Do you have any signings or appearances coming up?
Always. Follow me on Twitter.
Who were your inspirations?
You’re the meaning in my life, you’re the inspiration. Didn’t you know that you are the wind beneath my wings?
Favorite authors?
David Eddings! Mercedes Lackey, Neil Gaiman, Brad Willis, Alex Bledsoe
What book do you read over and over the most?
The Belgariad. I must have read that series half a dozen times or more.
Is there a book or book series that you recommend to people?
The Belgariad, anything by Alex Bledsoe, Thieftaker by DB Jackson, everything I write Do you have a dream project that you want to write in the future?
I have about a dozen
Do you have a special way of generating story ideas?
Back to poopin’
How much of you is in your characters?
About 300 lbs. There’s a butt-ton of me in my characters, especially Bubba, Jimmy and Adam (The Chosen).
If you could live the life of one of your characters, who would it be?
None of them. I torture those bastards too much!
What genre do you prefer to write?  To read?
I guess I’m a horror writer, but I can’t tell the difference between most horror and urban fantasy nowadays. I read mostly horror and urban fantasy, with some epic fantasy thrown in. Do you prefer writing short stories or novels?  And why?
They’re both so different. I like short stories because they can get in, get out, get done. They’re more instant gratification. Novels allow you to explore a problem more deeply, and they have more opportunities to blow shit up.
What are you working on now?
Working on Book 5 of the Black Knight Chronicles and another Bubba story, plus Book 2 of Return to Eden, and a new thing with dragons.
Is Writer’s Block ever a problem for you?  If so, how do you deal with it?
Writer’s Block is bullshit. Either sit down and write, or go vacuum the cat. Don’t be such a pussy.
What 3 things do you feel every aspiring writer should know? Writer’s block is bullshit. Tequila landed more book deals than purple prose. Nobody gives a shit how great you were in grad school. What is your funniest/ awkward moment at a convention/signing event?
When a guy came into a bookstore thinking he was going to a John Hart signing.
How do you use social media in regards to your writing?
I retweet Delilah Dawson and Chuck Wendig. That’s all I ever do on social media.
Thanks so much for yout time, John.
Look for John’s story,
White Lightning:
A Beauregard the Monster Hunter short story
in the upcoming
Capes & Clockwork.