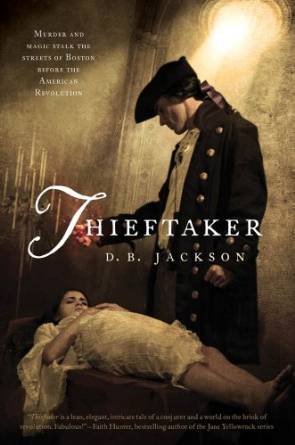 At first, I thought Thieftaker would be a tale of just another paranormal detective, told in a noir style and set in some cliché setting, geared to catch the attention of the would-be reader. There seems to be a lot of those around these days. What Thieftaker turned out to be was an incredibly well-written novel that grabbed me immediately.
The story starts off in Boston in 1765. The city is reeling from the turbulent events as growing talk of revolution is whispered in the shadow-laden corners. But our hero, Ethan Kaille isn’t interested in any of that nonsense. He is a thieftaker, a detective of sorts who uses spells and conjuring as a means of helping him solve cases. He has a strict personal policy to work on cases of stolen property, while steering clear of most everything else, especially anything having to do with homicides. That is, until he is hired to locate a stolen necklace, wore by a young woman who’d been recently murdered. The trinket had been around her neck at the time of the killing, and her father wants the item found and returned. Of course, both he and her father are aware that finding the necklace may reveal the murderer. None the less, Kallie accepts and takes the case. Conspiracies abound as city leaders, potential rebels and Kallie’s thieftaker competition are mixed into the case.
There are a number of factors that endear this book to me.
First off, the writing is superb. The story-telling is slowly paced but in a good way, giving the reader time to absorb everything going on in this richly detail world that the author has created.
Second, the historical aspects are a big hit with me. The fictional tale weaves in various Revolutionary War heroes and founding fathers, as wells as some actual events from the time period to make the world feel as close as possible to being there. The descriptions of Boston, the various neighborhoods and other locations throughout the city also add the to historical nature of the setting and help the reader to feel the cobblestones under his or her feet.
Thirdly, the characters are well defined, showing us not only the good but the flaws as well. Even the villains are presented in such a three dimensional manner that you can empathize with their reasoning for doing what they do, instead of being the typical dastardly, hand-bar mustache wearing cartoons badguys which appear in far too many books of this genre. Kallie, himself is a deeply flawed man, with a lot of backstory that this first book only touches on. We’re given a wonderful character while knowing there is far more is to come from his dark past in future tales.
Finally, Kallie’s lack of political interest. With a story set in the pre-war era, the story touches on the growing struggle for independence. This could easily have gone in the wrong way with our hero using his talents to help the rebels and spur on the Revolution. Instead, Kallie has little interest in the looming war, the rebel cause, or politics in general. He is a man dedicated to his work, regardless of the historical events happening around him. Personally, I really loved that he just did his job while the reader is watching not just him but the seeds of the Revolutionary War being sown.
D.B. Jackson, aka David B. Coe has done a bang-up job on this one and I look forward to reading the rest in this series. Highly recommended.