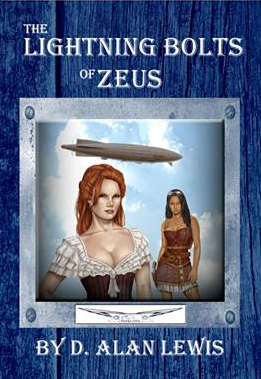 The First Hawke Girls’ book is out!!!
The Lightning Bolts of Zeus A year and a half after I started writing it, the first Hawke girls’ book is finally out. Ok, maybe in the publishing world that could be considered fairly quick. After all, my first novel took 5 years to write, a year and a half to publish the first time…then the publisher goofed up and later folded. Then came another year of work until it was re-released by the good folks at Dark Oak Press.

LBoZ isn’t my first foray into the steampunk genre but it is my largest/longest. With that said, this is only the first in a series. The second book is underway.

The fun thing about this steampunk novel is that you don’t have to know or understand steampunk in order to read it. The elements that you’d find in most steampunk stories are there but maybe wrapped up in a different way.

With that said, please take a look and tell me what you think.

And here is a fun fact…. all of my stories contain references to my children or other important people in my life. Sometimes a name or a date, but they are all hidden in there. Can you find any of them?